Waltham Abbey is one of those towns whose history is interwoven with that of its most important building, the Abbey itself. The riverside site of the town together with the well drained gravel terrain attracted early settlers. The settlement at Waltham (a forest homestead) was made by men who sailed up the River Lea from the Thames Estuary and built their huts as far as they dared venture from the main stream; twelve and a half miles was a long distance in Saxon times.

During the reign of King Cnut (1016 – 1035) Tovi the Proud, standard bearer to the King discovered a cross on land at Montacute in Somerset. Legend is that Tovi placed the cross on an ox cart which at the mention of the name Waltham miraculously set off on its journey. On reaching Waltham where Tovi had a lodge and the ‘miraculous cross’ came to be housed in a church there. The cross was believed to have great healing powers and Harold Godwinson, Earl of Wessex and later to become King Harold, is reputed to have been cured of paralysis after praying before the cross and in gratitude he replaced Tovi’s church. The church was consecrated on Holy Cross Day, 3rd May 1060, five years before Westminster Abbey, which King Edward was was having built at the same time. Harold also founded a college of secular canons to serve the church and work among the people of the town, which, then as now, was bounded by the river on one side and the Royal Forest of Waltham, now Epping Forest, on the other.

In 1066 King Harold knelt in prayer in his church before going to out meet meet a soldier’s death in battle with William the Conquerer at the Battle of Hastings. Legend has it that Harold’s body was brought back to Waltham to be buried in the church.

Following the Norman Conquest, the Manor of Waltham was given to the followers of William and the church to the See of Durham. The church became rich from pilgrims visiting to pray before the Holy Cross, and in the early 1100’s the current building was started on a much larger and grander scale. The secular canons continued until 1177, when as part of his penance for the murder of          Thomas a’ Becket, Henry II founded a priory of Augustinian canons’, the church was granted the status of an Abbey shortly afterwards. The Abbot had a seat in Parliament and his influence and power was great.

Meantime the Town was growing around the Abbey and during Richard I’s reign it was granted a Charter to hold markets and fairs. The Charter Market continues to this day on Tuesday of each week.

Throughout the Middle Ages the town and the Abbey prospered beside each other and many distinguished people passed through the town en route as a guest of the Abbot. Cranmer, Archbishop of Canterbury was a notable visitor  and in a house close to the Abbey walls he originated one of the chief movements that led to the coming of the Reformation. Monarchs came to Waltham not so much to visit the monastery as to hunt in the Royal Forest of Waltham. Richard I was here in 1248 and Richard II was in the area when he received news of Wat Tyler’s rebellion.

The harmony between the Town and the Abbey ended when Henry VIII ordered the dissolution of the monasteries. Their possessions were sold or given to court favourites; Waltham was leased to Sir Antony Denny. The canons were expelled and the monastic buildings demolished. However the demolition stopped at the low wall dividing the monastic choir from the nave and the parish church was saved for the townsfolk. The great central tower was demolished and rather than let the bells be lost, the parishioners bought them and put them in storage until a new tower was built. Unfortunately the tower cost so much to build the bells had to be sold to raise the needed funds. A ring of twelve bells was built up later and these are the ‘wild bells’ referred to in Tennyson’s well-known poem “In Memoriam”.

Despite the changes that came with the loss of its abbey, Waltham continued to flourish as a town even if its life became less colourful and less affected by visits of dignitaries and monarchs. Industries were set up, one of the earliest being the the manufacture of explosives at the Powder Mills. 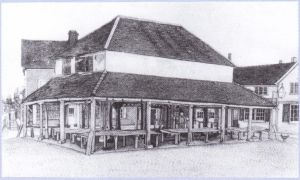 During the 19th century the horticultural and glasshouse industry flourished with the demand for fruit and vegetables for an ever expanding London. The coming  of the railway at this time together with improvements to road transport led to an even greater expansion of the horticultural industry and to the growth of the area as a place of residence. Because of the ease of access to London the growth has continued to attract residents who work in the capital. 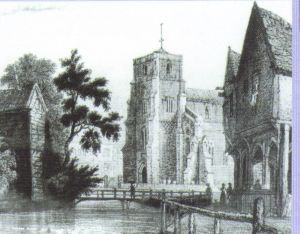 The end of the 19th century saw the formation of the Waltham Holy Cross Urban District Council in 1894 to administer to the needs of the local populace. They continued to manage the Town’s affairs until 1974, when. at the time of Local Government Reorganisation, the major affairs of local government in the area were transferred to the newly formed Epping Forest District Council. and the disbanded former council applied for and was granted parish status and thus became Waltham Abbey Town Council. The Town council, awarded Quality Council status in 2005, is responsible for the minor functions of local government such as recreation, cemeteries, markets, tourism, and, of course publication of the Town Guide.

The town continued to expand throughout the last century both commercially and residentially. The horticultural industry has however declined and many of the glasshouse nurseries have been sold for residential development. We now see a diverse range of manufacturing companies based on the industrial estates in the town and The Royal Gunpowder Mills ceased to manufacture explosives and became an experimental and research establishmment prior to total closure and redevelopment as a visitor attraction.

Now in the 21st century the Town continues to grow with housing on part of the Royal Gunpowder Mills site which closed its operation in 1991 and now houses the Gunpowder Mills Museum. Commerce continues to expand and we have recently seen the construction of the largest distribution centre in the south of England for the Sainsbury supermarket chain.

So a thousand years of history from Cnut to Elizabeth II has witnessed this market town expand from a hamlet on the banks of the River Lea to the town we see today. 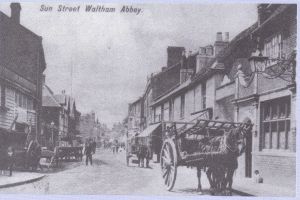